The days are really ticking off quickly now and I’m back in Manchester for that final run in before we head to our holding camp in Newport on August 17th.

In fact I’ve just come back from a training camp in Newport as the Olympic team were putting the final touches to their Rio preparations in Manchester and it’s just too busy to get in the quality of workouts needed, so we’ve been warming the track up for them in Newport as the head to the holding camp before jumping on the plane to Rio.

Training is going well so far, managed a great strength block, followed by a nice top up on endurance, and even managed to get a hit out in the 1km TT at the recent Masters Nationals Championships. As an added bonus to doing a pretty strong ride I ended up on top of the podium and picking up a National title! The ride was a good marker of how things are going and has highlighted that I’m not a million miles away from where I want to be, and the elements I was lacking on is what this next block of training is all about. 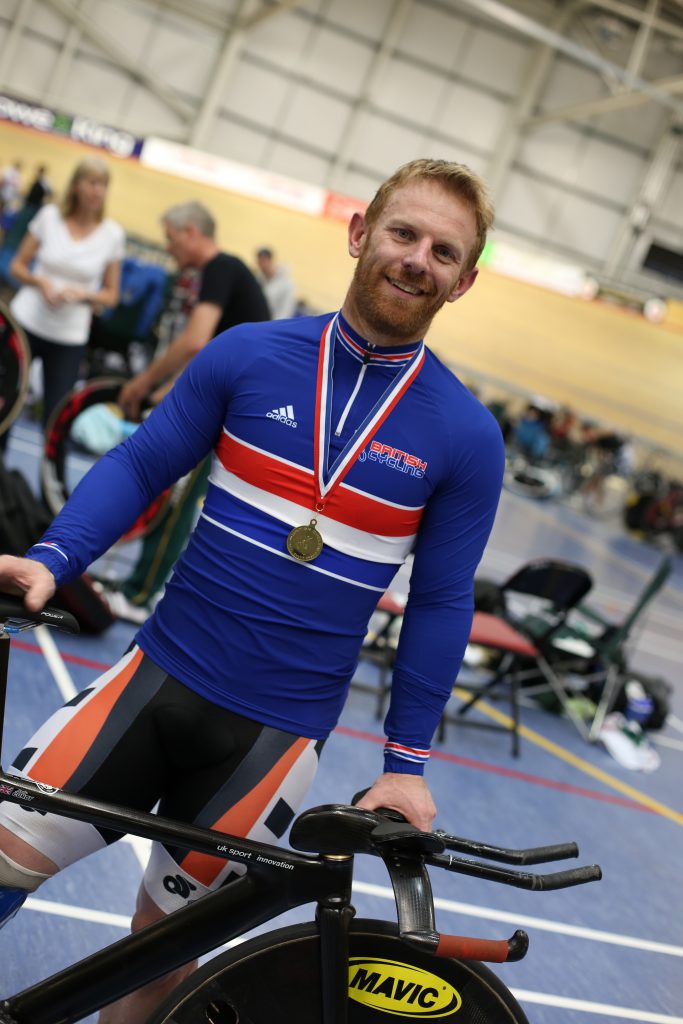 This time in the Paralympic cycle is always the most anxious and enjoyable, as you try to stay as healthy as possible, not pick up any injuries and worry about every element of training as there are not many days left to point it in the right direction if something is out, but then on the plus side, we get issued with all our kit from Rio, bags of clothing to wear in the village and venues, kit to ride in, and the coolest part, our new bikes and cycling specific kit. Although may have to wait a few more weeks as the Olympians need theres first! It’s always a bit of a last minute rush, I remember not even having my handlebars for Beijing until I was a few days into the holding camp, but they arrived in time and did the job!

The last bit of kit that I do need to finalize, is my leg. At the moment I’m using my London leg and have my Beijing leg as a backup, however, fingers crossed by the time I get on the plane to Rio, they’ll be a new leg to show off too, and that’s always exciting as I try and get a snazzy paint job to go with it!

With 50 days to go it’s probably a good time to thank all the people involved in my Journey to the games.

UKSport and the National Lottery – for providing the funding to allow me to train day in day, and rest and recover correctly

British Cycling  and English Institue for Sport – For the coaching, equipment and facility access. Plus, all the behind the scenes experts in Nutrition, Strength and Conditioning, Physiology, Psychology, Biomechanics, Aerodynamics, Physio, and Medicine.

Alexander Mann Solutions – For their continued support of my goal to win Paralympic Gold again.

Also Zwift who provided my state of the art setup in my spare room to assist in my training.

And last but not least, My family. My Mum, Dad and Brother for their continued support, I wouldn’t be here without them, and finally to my girlfriend Stacey, who puts up with my moaning, and the days when I’m tired and grumpy, but never ceases to put a smile on my face.

Thank you to everyone and hopefully I can do you all proud.

Hopefully catch up with you soon, most probably when we get to the Holding Camp in Wales.

Well here we go, 3 days to go until the 2016 ParaCycling Track World Championships and 177 days until the Rio Paralympics, 2016 is all of a sudden getting interesting.

These World Championships are the last stepping stone of a 4 year quest I’ve set myself on since the disappointment of the 1km TT in London in 2012.

Things up until last year had been going really well, I’d managed to retain my titles in the 1km TT in Aguascalientes 2014 and Apeldoorn 2015, in doing so reduce the WR time to 61.466 in the thin air of the Mexican velodrome, and also bring my sea level best time down to 64.381. But during the summer of 2015 when getting back into the gym I managed to cause a minor injury to my elbow, little did I know it was going to be still causing me issues 9months on. The injury itself wasn’t anything to right home about, golfer elbow, but it affected so many things I was doing that my training became seriously compromised, out of saddle accelerations, standing starts all had to bite the dust, as well as a number of useful exercises in the gym. Thankfully the injury didn’t stop my ability to ride the bike, although I was limited to doing all efforts in the saddle.

Over the weeks and months, we put together a training program that worked on areas that I didn’t normally focus on, and these would hopefully would keep me on track with my 2016 goals.

At the end of September, I had to withdraw from the 1km TT at the national championships as I was still unable to start the bike without pain. However I could ride the Open Sprint competition and ParaCycling 200m. Both of these events comprised of the flying 200m TT, which I could ride as long as I didn’t get out of the saddle.

It was clear that the work I’d been doing was working and things were still on track. Come November I was still having issues with my elbow, although I was still making progress with what I could do.

With the C1 event in Manchester I again had to withdraw from the 1km TT, something I didn’t really want to do, but I needed to keep the bigger picture in mind. It was difficult as this event was one of those very few opportunities where I can actually wear the rainbow stripes I’d earned in Apeldoorn.

Although unable to ride the kilo I was able to ride in the team sprint, the nature of the ParaCycling event meant that I was still able to start by using a seated start and get onto the 2 riders in front of me.

This was a groundbreaking moment, not so much for my injury, but in the fact that it was the first time since 2011 we’d manage to run a team that not only was fast, but we’d be competitive on the world stage. Teaming up with Jon-Allan Butterworth who was returning to the squad after a year away, and our new star from Athletics Kadeena Cox, with no practice we gelled together on that first ride to set a time quick enough to make the final in Apeldoorn, and then in our final ride we found even more time to dip under 50seconds and set the fastest time in the world in 2015.

With a training camp in Majorca and Valencia under my belt things have been going from strength to strength and I feel in a good place ahead of these world championships. I finally managed to get out of the saddle and do some standing starts just a few weeks ago, as my elbow is nearly back to full strength.

It’s going to be a tough championship in the sense I’ve not ridden the kilo in 12months, but I’m in good form and looking forward to putting all the pieces together on Thursday. This track has happy memories for me as I rode to the gold in the team sprint and kilo here in 2011, both in WR times. Hopefully if it all goes well I can pick up where I left off 5years ago.

If you want to follow the event, British Cycling will be live blogging from the track center via their website www.britishcycling.org and if you’re on twitter you can follow the #paracycling2016 hashtag for all the latest information.

Catch you all on the other side as the countdown to Rio continues.