Para-T Cycling Team is a British Based UK Paracycling team sponsored by MMS 360 and founded by Jody Cundy MBE & Christina Kelkel in 2010.

Currently 3 Para-T riders, Stephen Bate, Megan giglia and Jody Cundy MBE have been selected by British Cycling to represent Paralympics GB at the up and coming games in September 2016.

The team is made up of Paracycling Veterans such as Darren Kenny, Rik Waddon and Jody Cundy, Elite Para-Cyclists such as Jaco Van Gass, Stephen Bate, Megan Giglia and Development riders alike. All of whom benefit from the ability to tapp into funding for races, kit, supplies to enhance and support their cycling ambitions.

Para-T are currently looking for 2017 sponsors so that they can raise the level of support to current riders and wish to work closely with British Cycling to ensure the sport has many more years at the top of the Paracycling Medal Tables. 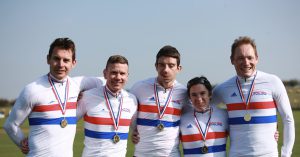