After the last 2 weekends, I thought it would be a good idea while I had a little spare time, to reflect on how cool they were, here’s the first weekends antics.

This experience ended up coming off the back of this tweet. 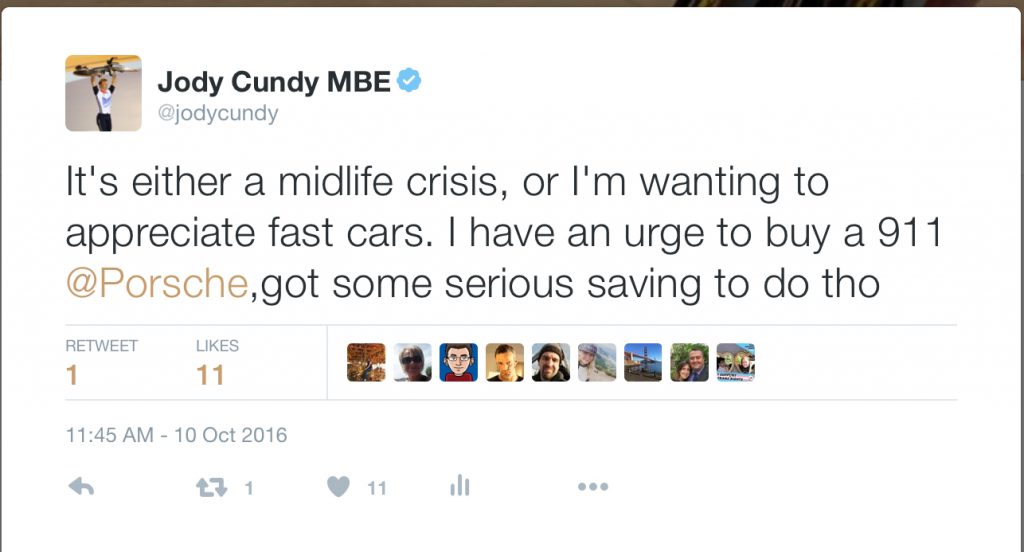 After tweeting this I shortly had a reply from Richard Eniffer at the Colchester Porsche Centre, saying that he could help with that and to send him a direct message. As you would expect I did what anyone would do and checked out Richards profile and to my surprise it looked like this was the real deal, and I couldn’t reply quick enough. He explained that they had a nice demonstrator 991.2 Carrera S in the showroom, and I would be welcome to use it for a long weekend. Once I’d realised he wasn’t joking and this was really happening I planned a road trip to make the most of the experience.

First up it was all about getting down to Colchester, I am based in Manchester and its a 4.5 hour journey to the showroom. I left excited about the day ahead an I arrived at the Porsche Showroom just after 1pm to be greeted by Richard, where we chatted through the plans for the weekend, before I got my Rio medals out to show all the staff at the dealership. While I was doing this, another staff member popped out to pick up my ride for the weekend.

Typically the rain started to lash it down, so they brought the car inside the and I had my first experience of sitting inside a £100,000 car, as Richard took me through the controls and features of the 911. We snapped a few pics, and that was it I was turning the key for the first time and driving off the forecourt.

To say that this was a little nerve racking would be an understatement, my normal day to day car is a Skoda Fabia VRS, a sporty little hatchback with 177 BHP, but I was about to drive a car that was only a fraction heavier, but sporting 414 BHP. The last thing I wanted to do was wheelspin out of the showroom, loose control and T-Bone the numerous Porsche’s sat in front of me. Obviously, this wasn’t going to happen, but I certainly had visions it would before I pulled away.

To my surprise the car was incredibly easy to drive, in fact I’d go as far to say as it was even easier to drive than my everyday car. This surprised me, and helped bring my heart rate down as I set off on my road trip.

First stop, was to visit my parents in Wisbech, my brother Ashley knew I was coming over but I’d managed to keep it secret from parents, so we thought it would be fun to see their reactions when I pulled into the drive. I picked up Ashley before we made the journey to mum and dads. The smile on his face when I put my foot down in the 911 was a picture, to be fair both of us couldn’t stop smiling and laughing, It was a such a good feeling, we went around the roundabout and then back over the same piece of dual carriageway we’d just come from, just to do it all over again!

By the time I got to the house it was already dark, so we pulled in the drive parked up and I came in to see everyone. Mum and dad were surprised to see me, and started quizzing me as to why I was home! That was when I took them outside, and they saw the 911 sat on the drive. Their jaws hit the floor, initially my dad thought I’d bought it (I wish), and they asked all kinds of questions to which I filled them in. 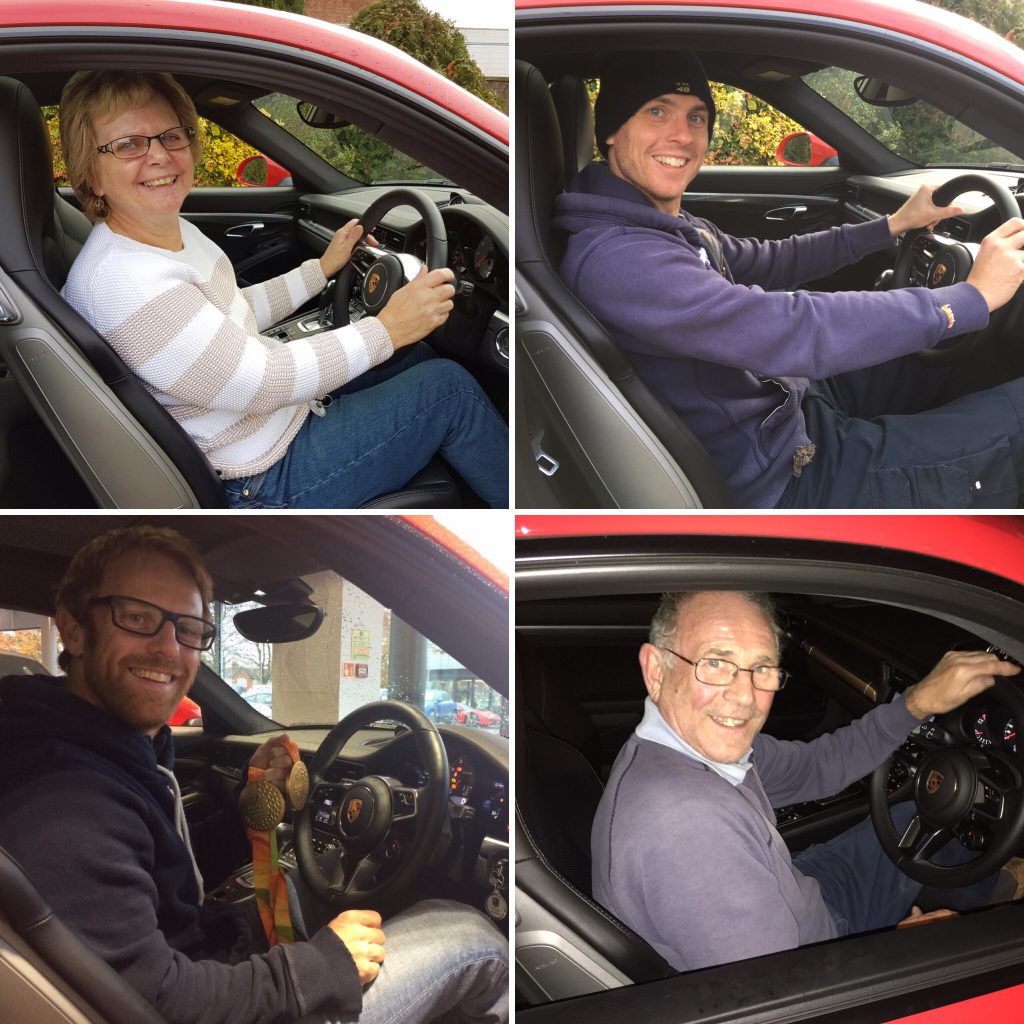 The second day with the 911 started with me giving rides to my brothers girlfriend, and then Mum and Dad. All of them on the same stretch of road where I’d been laughing away with my brother the day before. Judging by their expressions I think they enjoyed the experience.

Next stop for me was to head over to my girlfriend’s mums in Shropshire, where I would be meeting her as she’d be joining me for the rest of the road trip. It ended up being a bit of a family affair as her whole family are petrol-heads, so I ended up giving passenger rides to both her brothers, before we left for our destination for the evening. Our final port of call on day 2 was Aberystwyth, I found out there were some great driving roads there, and we’d be on the coast which is always nice come rain or shine. With it being Bonfire Night we headed to the local Rugby club to take in the annual firework display they host, it was great fun and on the way back to the car we had a few lovely remarks made to us about the car, to which Stacey replied its not our’s we borrowed it off a friend to which the family next to us said “we need a friend like that”, at that point it sunk in just how fortunate I had been to have this opportunity and with the smile still on my face I drove us to a lovely hotel just up the road for the night. What i should say here is that after 2 days and quite a number of miles clocked up already I was amazed at just how comfortable the car was and fresh I felt when I got out of it. 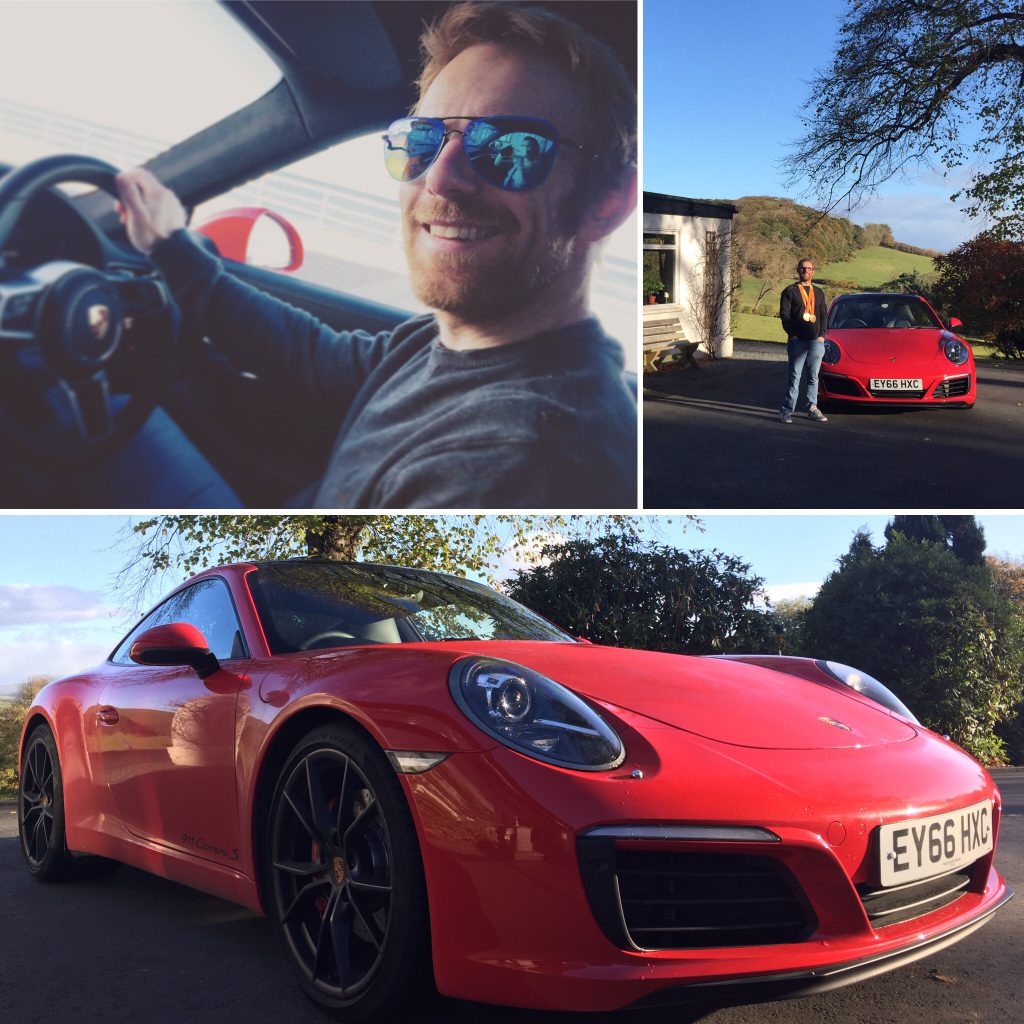 With another day of driving planned we set off from our hotel in glorious sunshine towards the A44, a road I’d read about online when researching great driving roads, and it certainly fit the bill. The road was a beautiful ribbon of smooth tarmac weaving its way through beautiful countryside and hills, I think this piece of road is where I fell in love with the car, the way it felt, and the response to your inputs it was just beautiful. 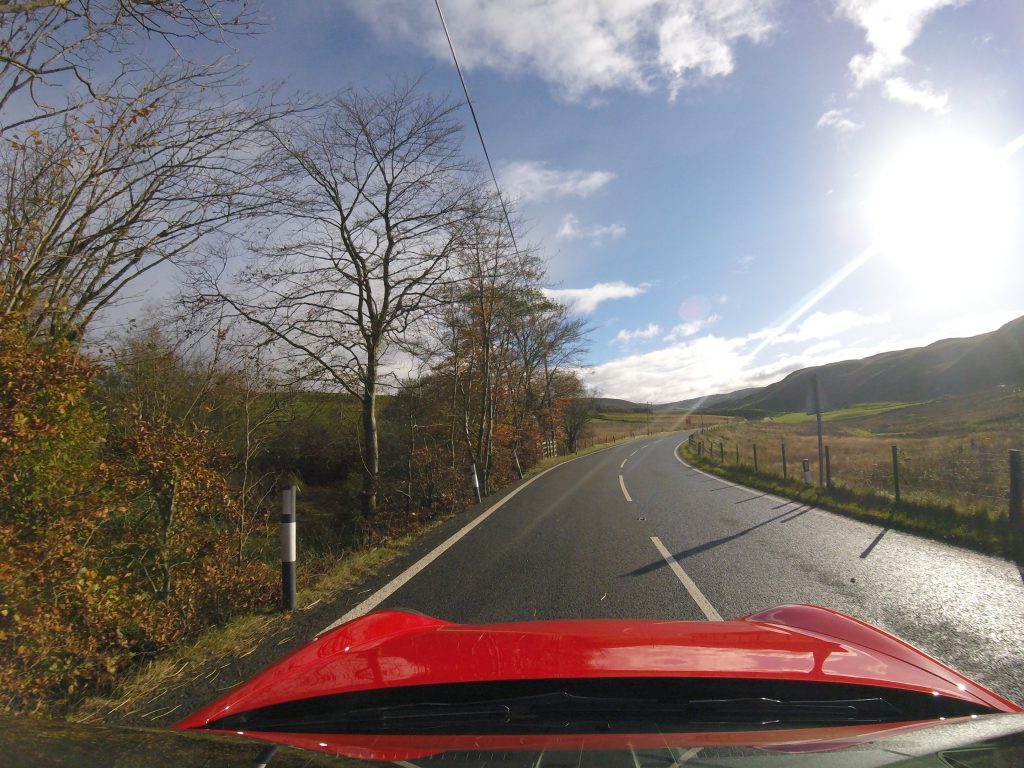 As we left the A44 we headed up over the Brecon Beacons and toward Raglan Castle (somewhere I’d wanted to check out ever since passing close by on a training ride during my holding camp for Rio) we took in the sights and parked outside the castle, and for the second time I’d noticed the interest in the car from general passersby. It seemed to be quite a head turner, and I felt amazing stepping out of it at every destination. 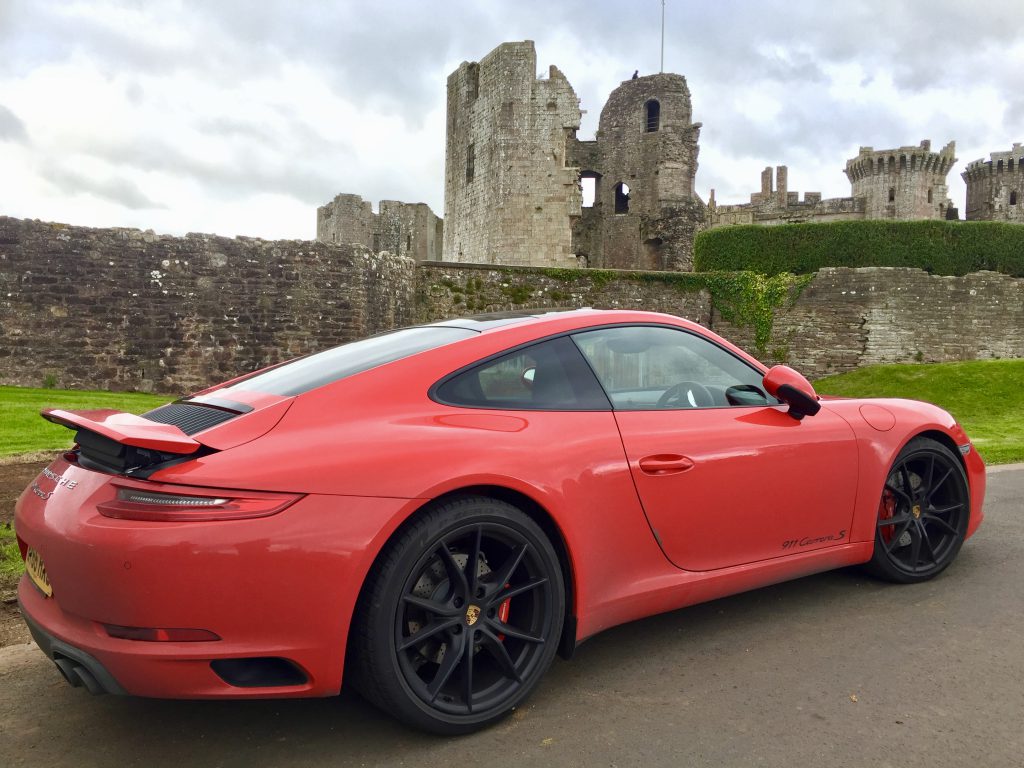 We continued our journey through to the Cotswold’s, stopping for a late lunch in Burford. The last part of our trip for day 3 took us past Henley on Thames into Marlow, it was dark by then so after finding our hotel and having a drink at the bar it was time for bed.

The last day of our 750mile road trip was spent driving across Hertfordshire and Essex before finally heading into Colchester. I took in every remaining mile in the car, knowing that I may never get to drive such a special car ever again. Handing the keys back was always going to be a difficult task, but one I could do with a big smile and lots of happy memories.

I had never in my wildest dreams thought that anyone would give me the keys to 911, let alone a brand new one. It truly is a very special car, one that put a huge smile not just on my face but also Stacey’s and all our families. To think a car can do that is just outstanding, and I totally get why the 911 is held in such high praise by everyone in the motoring industry, it’s a sports car through and through, but one that is as easy to drive as a humble hatchback but far more luxurious. But when asked can make every hair on your neck stand up to attention as it reminds you that there is over 400 HP on tap under your right foot, The experience has been so special that I’ve now made it my mission to scrimp and save so that sometime in the future I may be able to own my very own Porsche.

I’d just say a huge thank you to Richard and his brother who initially saw my tweet and forwarded it to him, its not often enough that strangers are so kind or so generous and I have been very lucky in my life to have had some incredible experiences but for me this was really something very special. 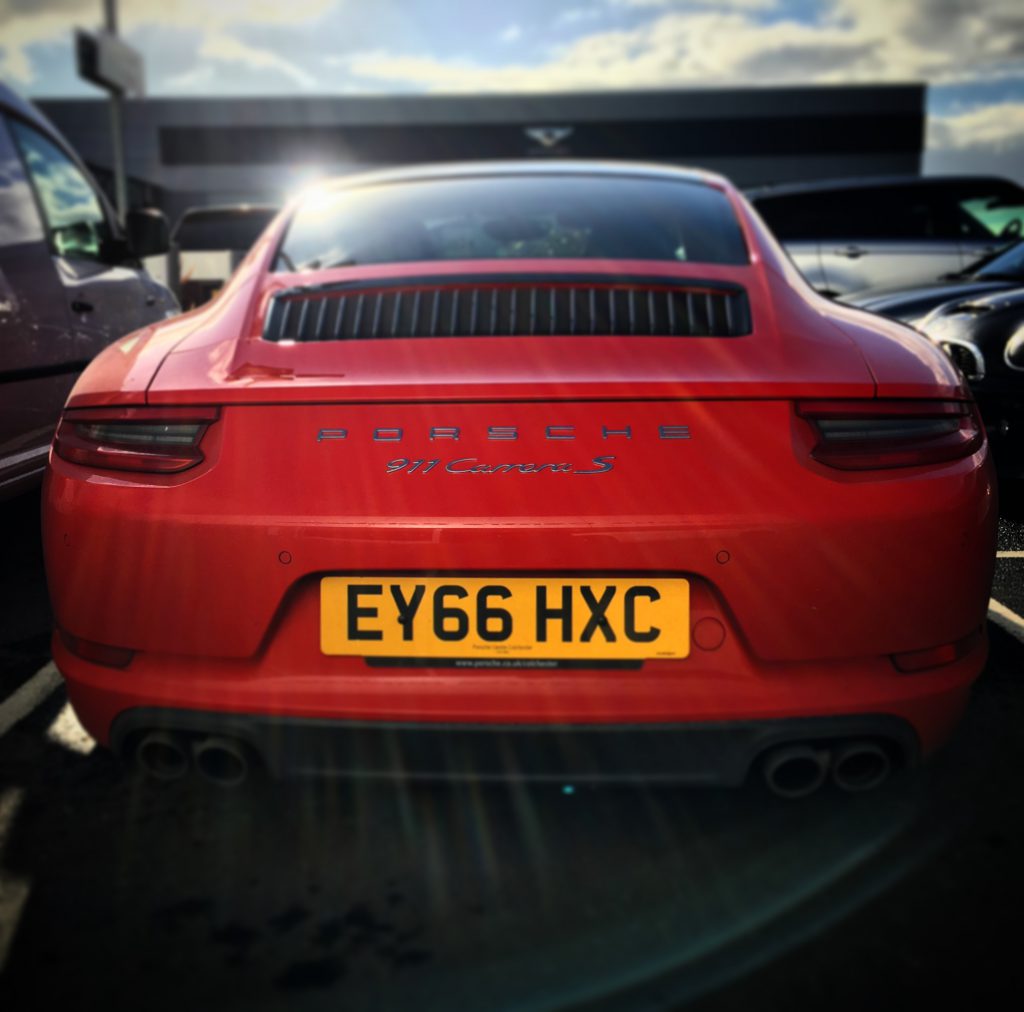